Operetta in two acts
Music by Francis López
Libretto by Félix Gandera and Raymond Vincy,
in a free version by Emilio Sagi

El cantor de México, or a Basque man in Paris.
There is no transcendental purpose in this operetta, nor is there any hidden sublime message in this story of travel which looks for exotic destinations on both sides of the Atlantic, in comings and goings with bright reflections of the great music-hall tradition of Spain and Paris, operetta and the Broadway musical. The orchestra is transformed into a mambo, jazz or Charleston band; playing mariachi music, boleros, swing or mambo.El cantor de México is a simple story that moves in a straight line thorough each of the 20 scenes, with a plot that is always illuminated and without ambiguities where each number appears to refer to the well-known verse of the song Mexico: “Thank God for the song which delivered your heart to the world.” 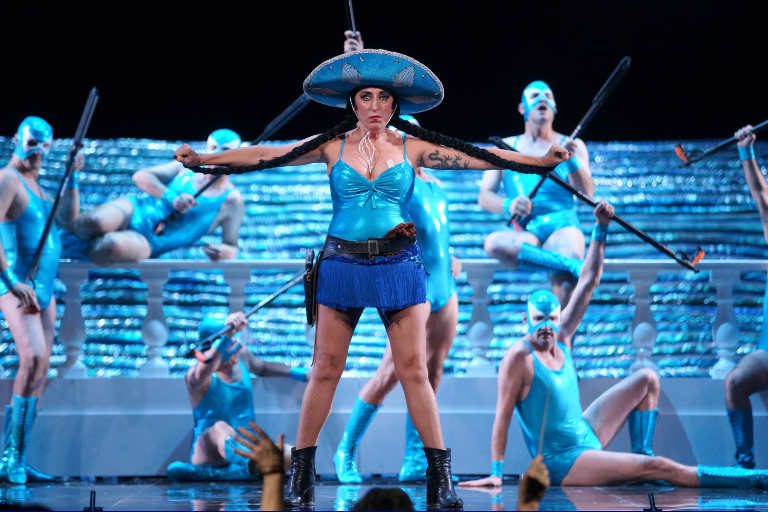 In Paris, the Italian producer and impresario Riccardo Cartoni announces to his star, the diva and capricious vedette Eva Marshall, that she will be the star of the film based on the operetta The Singer from Mexico, whose imminent shooting is to start in Paris and end in Mexico. But there is some bad news: the tenor co-star has cancelled, so an urgent audition has to be arranged to find a replacement. Opportunity knocks for the Basque tenor Vicente Etxebar, who left his beautiful village dreaming of making it big in Paris, but so far has only managed to find work as a stage painter. He auditions for the role, urged on by his optimistic colleague Bilou and supported by Cartoni’s secretary, Cricri, who is not only in love with him but believes in his artistic potential. His voice impresses not only the impresario and the director of the film, Mr Boucher, but the diva herself, who is excited to have such a handsome man as her partner.

The shooting offers scope for many musing intrigues which reveal some of the behind-the-scenes secrets of the world of theatre and cinema. The disorganised assistant director, Cécile, drives the director crazy by repeating every indication he gives her. Bilou tries in vain to attract Cricri, but all he gets is a sincere and friendly relationship; at the same time, Cricri is being driven crazy with jealousy seeing the brazen way in which Eva flirts with Vicente; in fact, the two have started an affair. Once the filming in Paris has concluded, Cartoni presents the two stars of the film at a press conference before setting out for Mexico.

After a number of days in Mexico, the vedette and Vicente have drifted apart. They argue in each scene they appear in together, delaying the filming. Cricri has had to replace the diva in a section of the dance; Vicente notices her and is impressed, in more than one way. As the plot of the film moves on, we see how Eva, in the role of Coronela Tornada and in charge of her female guerrilla fighters, kidnaps Vicente in the belief he is a spy and locks him up in a cage. Cartoni returns after a few days’ absence, and is alarmed to see the shambles on stage. But things appear to improve, now that Eva is happy because she has met another man who takes an interest in her, according to the cleaners’ gossip.

Shooting is resumed of the scene with the female guerrillas. Eva loses her temper again, tired of the continuous interruptions by the prompter and storms off stage. Vicente is still locked up in the cage, but he is finally rescued by Cricri. Suddenly, they realise they are made for each other. On stage, the final preparations are being made to film the spectacular last scene which concludes the film with a happy ending.