EXCLUSIVE FOR YOUNG PEOPLE UP TO 28

Anna Bolena, the light in the flashing of an axe.
Between classical clarity and a profound nostalgically romantic premonition, Anna Bolena is the tragedy of the solitude of a helpless individual set against the solitude of the powerful, woven into a melodic and dramatic thread that its composer inherited from Rossini, and a precursor of the spirited nationalist colours of the Verdi of the Risorgimento. This monumental musical discourse of the loss of reality which is Anna Bolena emerges like a powerful lighthouse freshly illuminating the Italian melodrama at a time of uncertainty. It is a light which the unfortunate queen will see in the blade of her executioner’s axe. 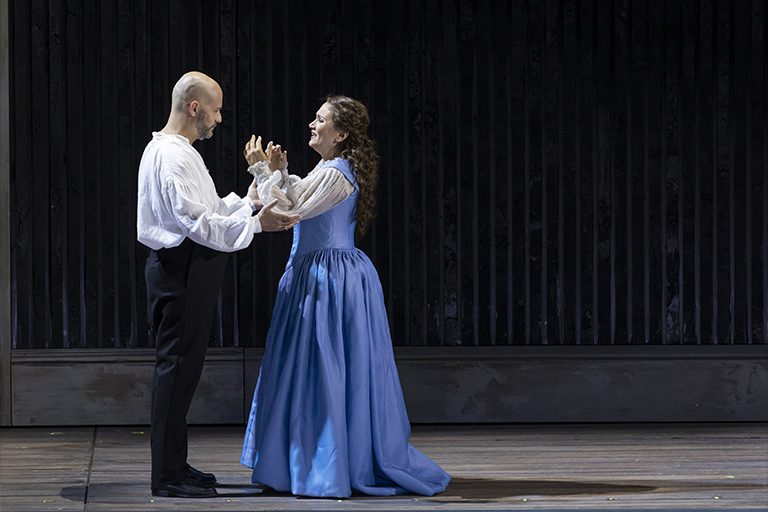 The action takes place in Windsor Castle and the Tower of London in 1536. King Henry VIII (Enrico) has fallen in love with Jane Seymour (Giovanna di Seymour), lady in waiting to his wife, Anne Boleyn (Anna Bolena). He wants to marry her, but first he needs an excuse to repudiate the Queen. His strategy involves allowing Lord Percy, Anne’s lover in her youth, to return from exile. He hopes that Percy’s return to court and proximity to the Queen will result in a compromising encounter between the two, allowing Henry to accuse his wife of adultery.

In the Queen’s apartments, the courtiers are talking about Anne’s despondency. The Queen arrives. Jane is nervous when she greets her. She is afraid that the Queen knows about her relationship with Henry and is affected by remorse, because she is the cause of her lady’s unhappiness. Smeaton (Smeton), the Queen’s page and musician, sings a song to cheer the mood. When everyone leaves, Jane is surprised by Henry’s arrival. The King is tired of their secret meetings, and wants to make their relationship public. Supported by her ambition, he has decided to marry her once he is free of Anne.

In the castle gardens, Lord Percy, recently returned from exile, confesses to Lord Rochefort, the Queen’s brother, that he still loves her, and recalls their youthful relationship which was broken off when she married Henry. When the King and Queen arrive with their courtiers, Percy is unable to hide his emotions when he greets the Queen. Everyone notices him blushing, including the King. Henry cunningly invites Percy to join the court, while asking his officer Hervey to spy on Percy and the Queen and keep him informed.

Smeaton, who is deeply in love with the Queen, enters her apartments to return a locket with her portrait which he had stolen earlier. When he hears someone coming, he hides without having time to put the locket back. Rochefort urges Anne to see Percy. In their short meeting, he declares unconditional love for her. However, the Queen remains firm. She asks him to leave the country and never see her again. Percy draws his sword to stab himself, which brings Smeaton out of his hiding place to prevent it. The two men start a scuffle, and the Queen faints in the disturbance. The King arrives and discovers a situation in which he can accuse Anne of infidelity. To add to the confusion, Smeaton drops the Queen’s locket with her portrait. Henry picks it up and shows it to Anne when she regains consciousness, and accuses her of treason. Despite her pleas and explanations, the King orders Anne, Percy, Smeaton and Rochefort to be thrown into the dungeon in separate cells awaiting trial.

The scene is the Tower of London, where Anne Boleyn is being held prisoner. Jane begs the Queen to admit to her guilt, as it is the only way of preventing the King from having her put to death. She refuses outright. Jane insists, while confessing that she betrayed her by allowing herself to be seduced by Henry. Anne forgives her.

Smeaton has falsely accused Anne, Percy and Rochefort before the council of peers at the King’s insistence, in the belief that in this way they will be saved from execution. Before entering the council chamber, Anne pleads with Henry to allow her to die without making her endure the humiliation of a trial. Percy interrupts impetuously and claims that he is Anne’s real husband, as he had promised to marry her before Henry met her. This makes Henry even more angry and complicates the Queen’s trial. Alone with Henry, Jane is overcome with remorse. Aware that her ambition has gone too far, she begs him not to convict Anne. The King does not back down and the judges condemn all those on trial to death.

Talking to Percy in prison, Rochefort expresses his remorse for being the cause of his sister’s tragedy by forcing her to marry Henry in his lust for power. News arrives that the King has pardoned the two of them, but they refuse the pardon and decide to die with the Queen. Meanwhile, the ladies of the court are looking after Anne, who in a state of delirium dreams of her wedding day to Henry and the emotional trauma it meant for her to reject Percy, her true love. News arrives from outside that England now has a new Queen. Anne faints. The guards arrive and take Percy, Rochefort and Smeaton to the block. They announce that one of the victims has already been beheaded.