Germany. Early eighteenth century. In a tavern on the outskirts of Saxony, Carlo awaits a letter of reply from his father, Massimiliano, Count of Moor, to whom he has asked forgiveness from exile, where he was confined for his inappropriate behaviour during his student days. He now lives with a group of bandits he wants to rid himself of as soon as possible. His brother Francesco, whose desire it is to take control of the castle, answers the letter on behalf of and behind his father’s back, denying Carlo his pardon and threatening him with imprisonment should he return. Furious, Carlo takes an oath to become the outlaws’ leader. Meanwhile, in the castle, Francesco forces Arminio, Court Chamberlain, to pose as a friend to Carlo and pass on to the elderly Massimiliano the false news of his exiled son’s death in combat and of his final wish that his fiancée Amalia, watching over the ailing count in the castle, be married to Francesco. Dejected by the events, Massimiliano falls dead, to the horror of Amalia and the satisfaction of Francesco.

Amalia is praying at Massimiliano’s tomb, when Arminio reveals to her that both Carlo and his father are still alive. Francesco arrives, and surprised that Amalia has not joined in the celebrations of his taking control of the castle, declares his love for her. When rejected, he threatens her with violence, but Amalia manages to escape, taking refuge in the forest.

Meanwhile, Carlo is leading a plan to save Rolla, one of the bandits, from the gallows, and burns both them and the city to free the prisoner. Soon after the bandits find that their camp has been surrounded, and so prepare to fight.

Amalia and Carlo suddenly find themselves in the forest and catch up on each other’s events, although he hides from her his link with the bandits. He even considers suicide when pondering alone, so ashamed is he of his situation. The presence of a stranger (Arminio) walking out from a nearby ruined tower, interrupts his solitude. Carlo approaches the tower and finds his father a prisoner. Massimiliano, in a worried state of health, narrates how his son Francesco had him locked him on discovering his death was a faint. Enraged, Carlo swears revenge with the help of the bandits.

Francesco, frightened by the nightmares he suffers each night, summons Moser, the priest, who unsuccessfully attempts to convince him to repent of his evil deeds. A group of horsemen begins to attack the castle. Meanwhile, in the forest, Massimiliano pardons Carlo and expresses his fear for the fate of his other son, despite the evil done to him. At that moment, the bandits return, informing Carlo that Francesco had escaped as they were bringing him to the camp as a prisoner, but that they brought booty in the form of Amalia. She recognizes Massimiliano as soon as she sees him, so showing the kinship between Carlo, Amalia and Massimiliano. Desperate, Carlo confesses his belonging to the bandits. Amalia swears her allegiance to him, saying she will remain with him always. The bandits, however, remind Carlo of his oath, while Amalia insists that she would prefer to die than live among outlaws. At the insistence of the bandits and a prisoner of his despair, Carlo stabs Amalia and surrenders to the authorities. 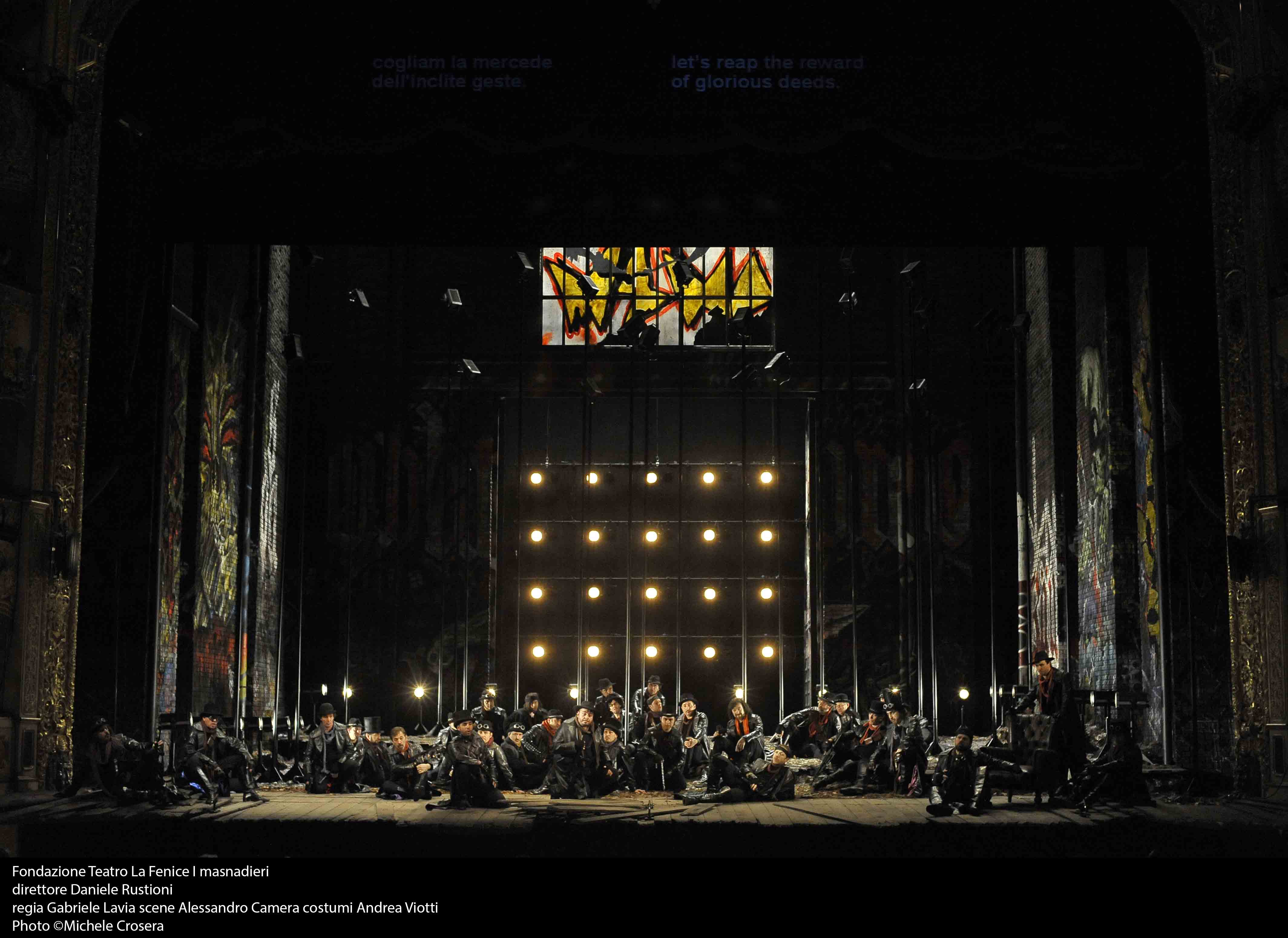 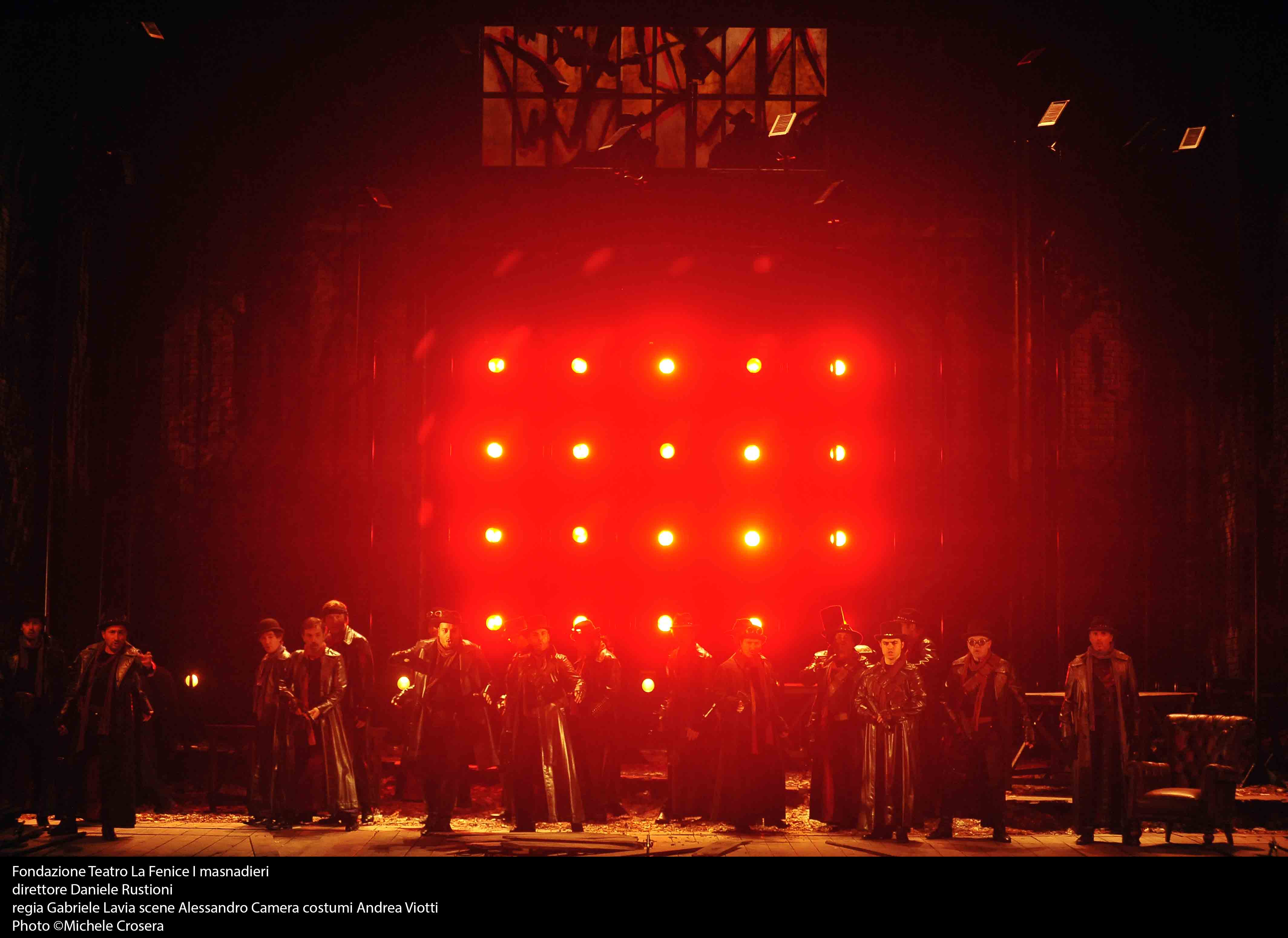 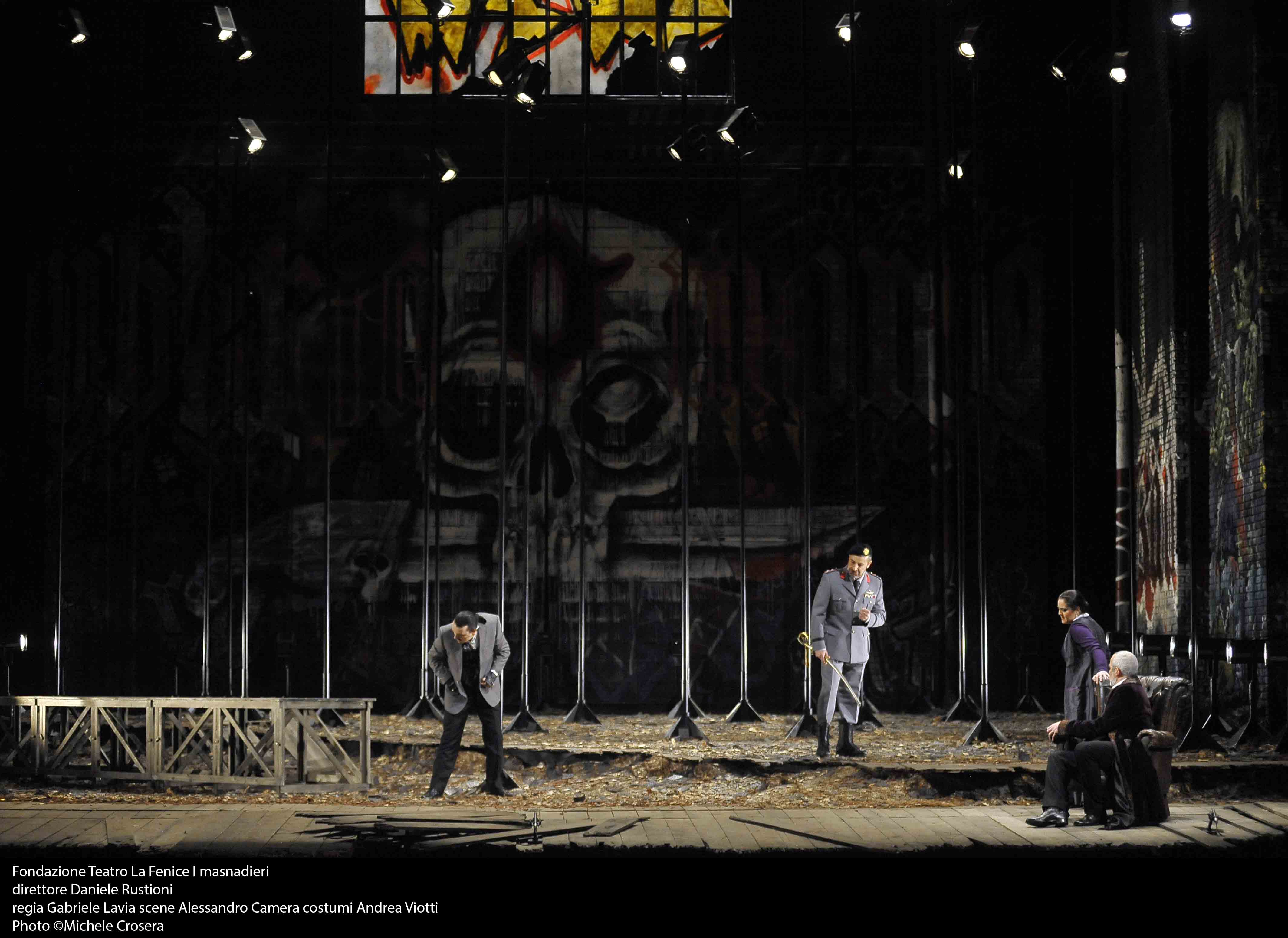 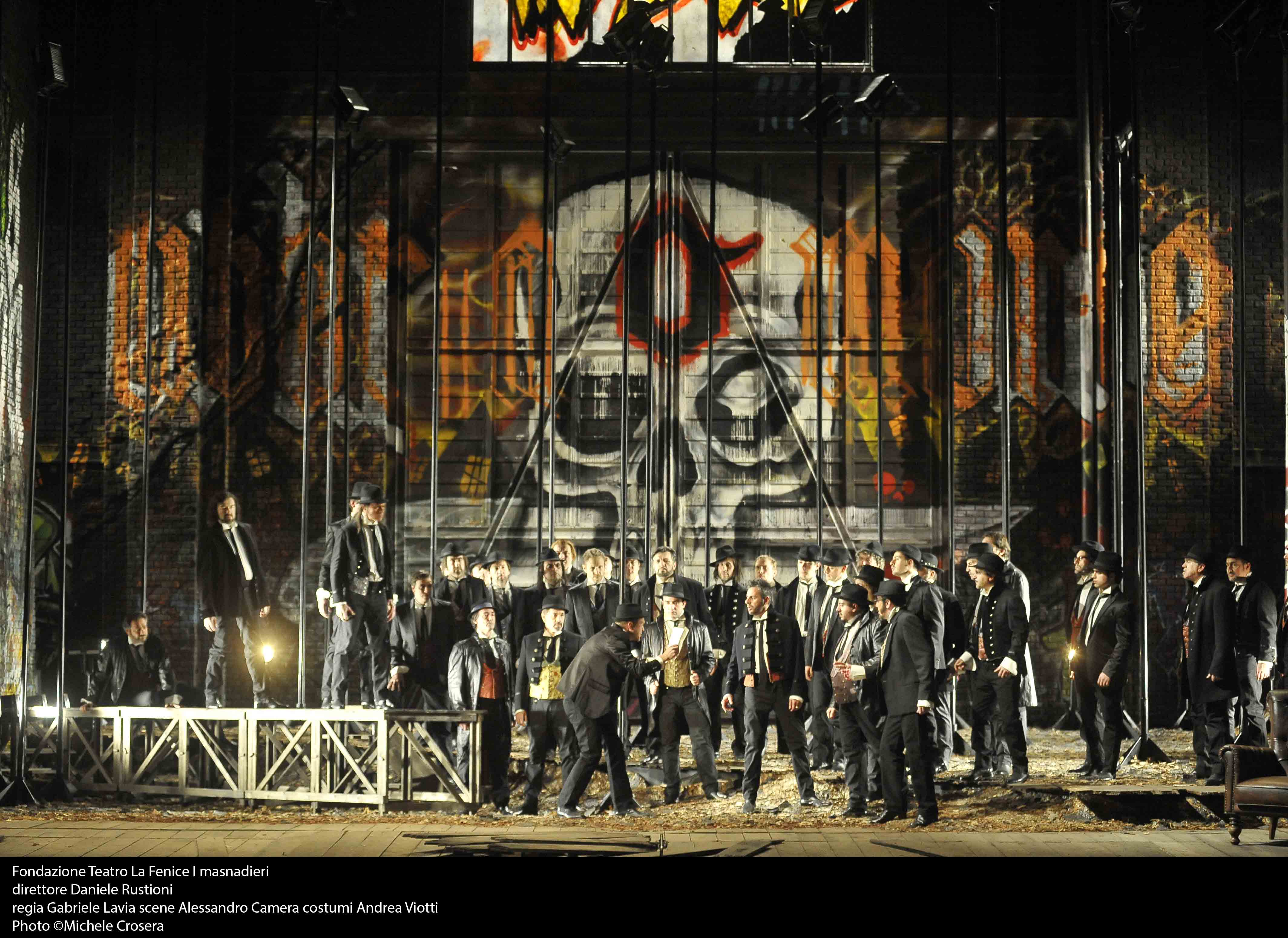 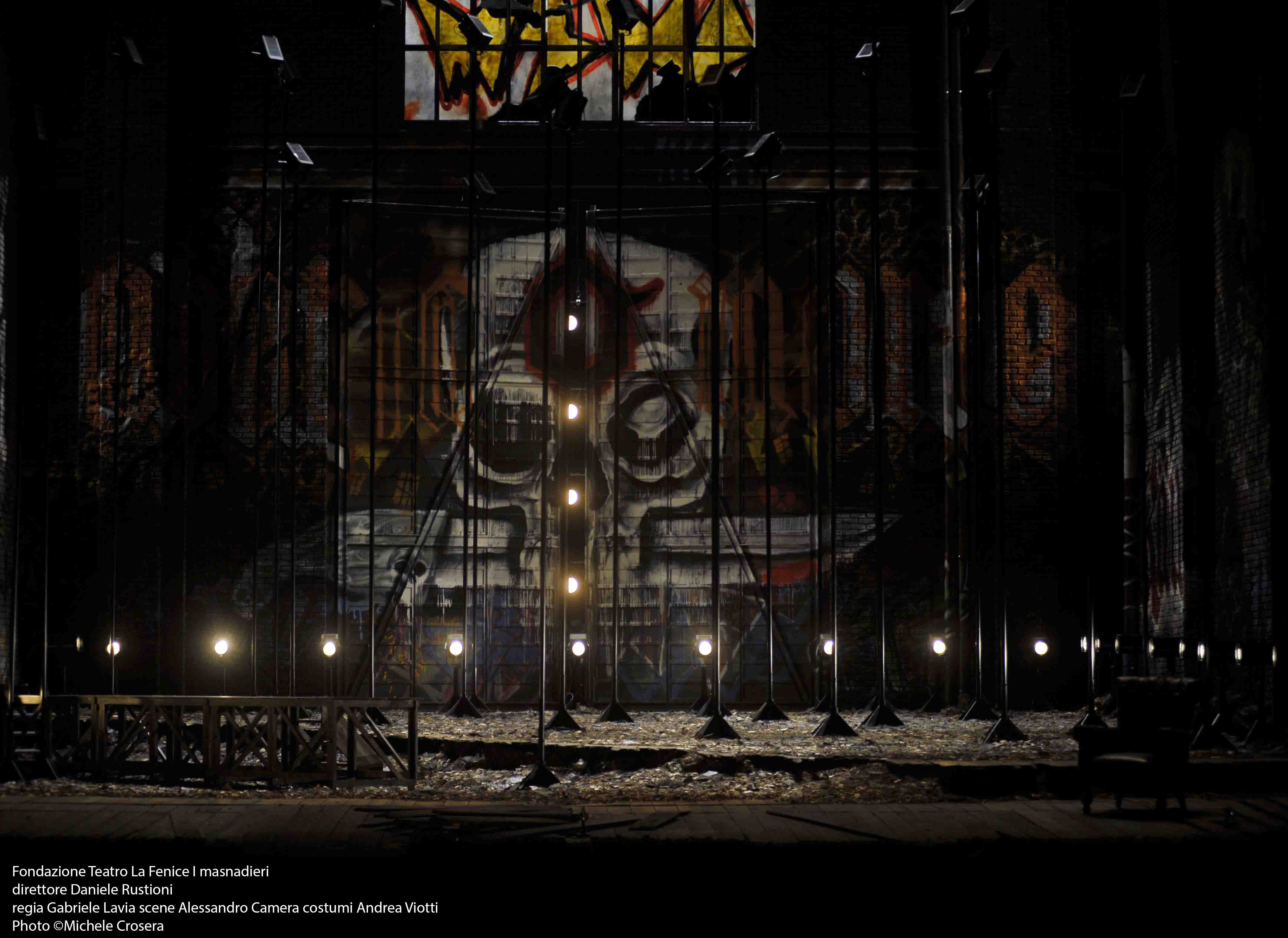